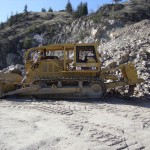 Re: A Township Wide Plan for Quarry Developments

At the end of the presentation Mayor Clarkson directed Pat Kemp the CAO of the Township to draft an interim control bylaw as suggested by the delegation that should give Council, and who it represents, time to develop a plan.

Today, the powerful presentation given by Ross Morton, President of the North Pigeon Lake Ratepayers Association and Roger Leclerc, a board member responsible for the Quarries’ committee, gained a huge step up for those concerned by the quarry issues. The constituents were listened to and heard.

More than 100 people squeezed into the Council chambers today to hear the presentation and witness the Council’s recognition of the importance of proper attention to this issue.

Beginning with a brief overview of the NPLRA, and the concerns of this group and other like minded associations representing more than 400 families in the Pigeon Lake area, Ross Morton explained that the objective was not to stop the development of quarries. It is acknowledged that development is part of reality. What the delegation requested is that when there are applications, they are held accountable to a proper process, a well thought out plan, and all within Ontario’s laws for municipalities.

Morton and Leclerc made a full description of the concerns that proper and due process has not been followed when applying for quarry development, including: re-zoning, studies of transportation, environmental and social impact. They pointed out that these are just some of several areas of concern that the Council has control over and that they do have the power to address, but have not appeared to have done so.

Roger Leclerc described effective and approved Municipal Guidelines, as set out by the Ontario Municipal Class EA Planning and Design Process that recommends public input at very specific phases of the planning, design and approval processes.

They also reminded Her Worship the Mayor of her promises in her inaugural speech of believing in strong relationships between council and public; support for initiatives to protect our water, to be responsible and provide tools for better information. Also the Mayor at that time said that the Mayor and Council “have a responsibility to provide you with good government. And we are going to give you the tools to keep yourself better informed.”

The NPLRA representatives demanded transparency. The local public, ratepayers, and voters should be fully informed about the process by way of reports, blogs and making available information that helps constituents understand the process and enables contribution. Transparency is more than a word its an action!

A solution, similar to the one Zorra Township had implemented, was offered to put in place an:

Interim Control By-Law that would prohibit the establishment or expansion of sand or gravel pits and stone quarries until such time as a study to examine the cumulative impacts is in place.

This would enable a review to be done and give the process time to ensure that all the objections or avenues of concern have been addressed. Morton continued by saying that in the process of finding out about this subject he and the Association had consulted with many highly qualified experts in the local region, many within the County itself, who would be available for advice and assistance.

The Mayor made a motion that Pat Kemp, COA of GCH, prepare such a by-law, which passed seemingly without discussion or objection.