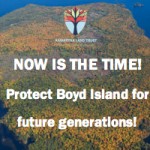 Donations and pledges have exceeded $900,000 and Kawartha Land Trust is confident target will be reached to preserve Boyd Island

KAWARTHA LAKES – With the $1 million goal to save Pigeon Lake’s Boyd Island within reach, Kawartha Land Trust (KLT) has extended its campaign deadline by one week.

As the largest undeveloped and unprotected island in southern Ontario, Boyd Island is home to unspoiled wetlands, diverse and old growth forests, wildlife, and a wide variety of plant species. First Nations peoples used the island as a meeting and harvesting place thousands of years ago and today it has compelling cultural value to them and to many others in the area. At Curve Lake, some refer to the Big Island as Chiminis.

The campaign began in the summer when the current landowner offered to donate Boyd Island to KLT provided the necessary funds to manage the property in a natural state in perpetuity could be raised by Nov. 30.

The funds will be held in trust by the registered charity to generate sufficient annual income to support basic stewardship activities on the island.

In implementing the extension, Mr. Hendren said, “We are so close. We are currently extending the campaign for one more week in order to get our fundraising goal and to ensure final government approvals are in place.”

He says the organization and its supporters are thrilled by the support the campaign has seen so far. In only a few months, countless individuals, groups and businesses have recognized the significance of preserving Boyd Island and they’ve backed KLT’s wish to see it done soon.

“We are almost there and are thrilled by the support so far,” Mr. Hendren said.

“If you haven’t pledged yet or you feel you can do just a little more, now is the time to make it happen.”

To learn more about the Kawartha Land Trust, or to become a donor, please visit www.kawarthalandtrust.org.