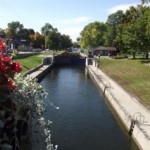 June has been a busy month for the Trent-Severn Waterway (TSW) with multiple announcements and a community meeting right here in Trent Lakes.

News Release June 19, 2015: The Harper Government announced major new infrastructure investments for across the TSW in the amount of $285 million.
According to Parks Canada this money is available over the next two fiscal years.
For the detailed report and locations identified please refer to this report:
http://www.pc.gc.ca/eng/lhn-nhs/on/trentsevern/ne/neA1.aspx

Also Jewel Cunningham, representing Parks Canada, spoke about the efforts and successes of the Parks Canada regarding the canals, i.e. a new business development unit, more infrastructure funding, new policies and application process for hydro generation projects (9 potential sites have been identified), efforts to increase revenue to reinvest back into the canal.
www.pc.gc.ca

The Peterborough Canoe Museum was represented by chair Ken Powell presenting the future relocation and rebuilding of the museum at the lift lock as one future revenue possibility. The plan is for an 80,000sqft building with 50% exhibition space. Submissions by architects have been narrowed down to 6 firms and will be presented in August followed by a capital campaign for 2016/17.
For the comprehensive strategic plan please follow their web site.
http://www.canoemuseum.cahttp://www.chextv.com/2015/06/29/31270/