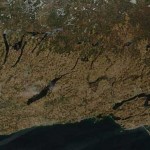 Kawartha Conservation sent us comparative spring satellite images of interest, confirming the kind of winter we had in the Kawartha Lakes/Quinte region 2014 compared to years past!

Kawartha Conservation are a watershed-based, non-profit organization established in 1979 under the Ontario Conservation Authorities Act.

Their focus is outstanding water quality and quantity management, supported by healthy landscapes through planning, stewardship, and science. Check out their website: KawarthaConservation.com