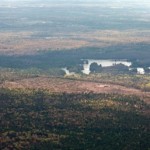 Proposed quarry and concrete plant near Bobcaygeon sparks controversy Becki Jory, who lives on Ledge Road near the proposed quarry in Galway-Cavendish-Harvey Township, says the operation will also impact Bobcaygeon’s roads and bridges. She submitted this aerial photo of the site. Kawartha Lakes This Week By Mary Riley BOBCAYGEON — The fact that 2014 is a municipal election year was not lost on the dozens of people who showed up in Bobcagyeon to learn more about a new quarry that, when licensed, will have a gravel truck running on Kawartha Lakes Road 36 every three minutes.

And, that is only in Phase 1 of its operation.”